Home  /  What to Build First: An Android or iOS App?

Four and a half billion people. That’s the global digital population in April 2019 according to  Statista.com of which almost 3 billion active mobile social users. This is a market you can’t ignore.

If you still don’t have a mobile app for your business, then it’s high time to get one. But which platform should you focus on for your project?  iOS or Android development; the battle is ongoing and probably will never conclude.

If you look at the global mobile app market, the numbers are staggering:

Many companies struggle to decide what platform they should use to develop their app. There are many factors to consider; while apps developed on the iOS platform consistently earns more revenue compared to Android, Android has a much larger global market share. However there is more to the story, and we need to dig deeper to understand what is better iOS or Android.

One of the first questions you should ask is who is your target audience and where do they live?

The primary consideration is where your first app adopters will be located. If your customers are outside of the U.S., Europe, or Australasia, it’s possible that Android should be your first priority as it dominates sales volumes of smartphones in Asia, Africa, and South America.

Knowing this will help you prioritize your development requirements and possibly save some money in the meantime as well.

When looking at the worldwide statistics for sales, Android has a clear lead over iOS in terms of market share. Android currently holds the largest global platform share with around 75% which mostly comes from developing countries and lower income areas compared to iOS’s 23% from developer nations. 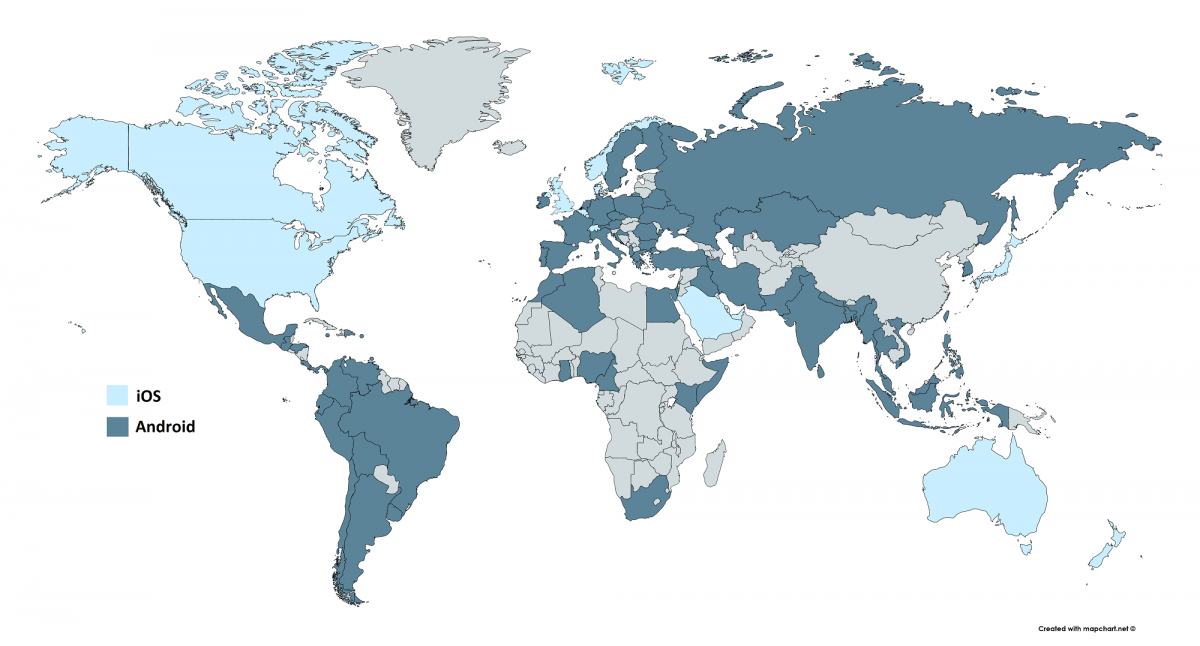 Demographics tells us a lot about Android and iOS users. This is where we need to start the discussion.

iOS users are typically younger, with a higher level of education, greater engagement and earn more money, so they spend more per app. Amusingly, iPhone users were also found to be vainer — taking 12 selfies every day, which is five more than Android users take.

The second point to consider would be the adoption of new technology.  According to a poll conducted by Hunch.com, iOS users are more likely to be early adopters.

On the other side of the spectrum, Android users seem to be late adopters which means they are less likely to own mobile devices that will allow apps to utilise rich new technology and features to deliver an improved user experience and functionality.

Given the fragmentation of handheld mobile devices running Android as an operating system, the issue becomes even more compound.

Another factor one needs to consider when deciding on the platform is app monetisation.  The capability of a mobile app to generate profit (if that is your business goal) depends on a number of things, including the platform on which it has been created. If you are thinking that just because Android has a bigger market share it also generates larger revenue, you should think again.

According to a report from Sensor Tower, the App Store earned nearly 93% more than Google Play in quarter 3 of 2018, the largest gap since at least 2014.

The firm states that approximately 66% of the $18.2 billion in mobile app revenue generated in Q3 2018 came from Apple’s App Store. The store made $12 billion in the quarter, up 23.3% from the $9.7 billion it made during the same period last year. 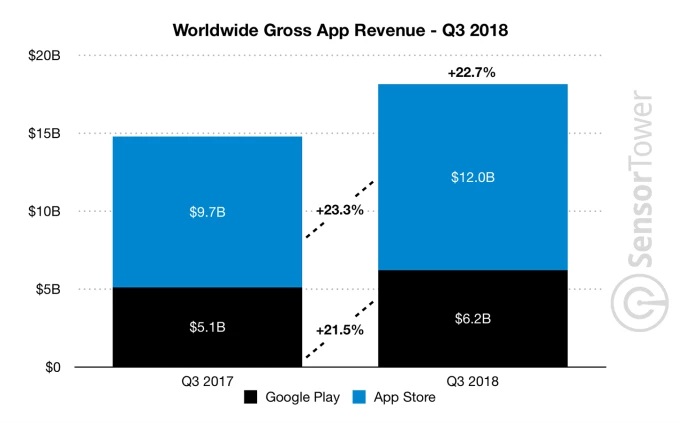 If app monetisation is one of your goals, there are some key platform differences to be aware of.


The takeaway: If you want to monetize your app without ads, whether through subscriptions, freemium models, or in-app purchases, then Apple may be your best bet. The same applies to e-commerce apps.

Getting your app fast to market is always a primary concern when building the app.

Why? It has to do with the system release cycles and something known as Android fragmentation.

Add to this the fact that there are lots of active versions of this operating system at the same time. To build an app that is compatible with all of these devices is quite a challenging and complex task. Thus, it’s crucial to consider timeframes before you outsource app development.

The differences in SDK’s, IDE’s and API’s is another conversation by itself.

Because Android is locked down by telecom carriers and Original equipment manufacturer or OEM’s, releasing new updates to Android becomes more difficult resulting in the adoption of the latest OS versions being usually slower than with iOS.

For developers, there is a benefit to being able to focus on supporting the newest versions of an operating system. With iOS higher adoption rates, developers can stop supporting older versions and devices sooner, reduce testing, incorporate newer API’s and reduce their development cycle times. If only about 10% of the users have adopted it, then the developer has to support older devices, do more testing and this way increase the development cycle time.

The bottom line: The Google Play Store submission is less expensive and less strict when it comes to publishing.

There are many aspects to consider when choosing a platform for app development.

By now you may have guessed that in general, from a financial standpoint as well as a time perspective iOS is a better choice, but from a market penetration stance Android is better.

The Bottom line: both Android and iOS are extremely successful which is why it’s smart to invest in both iOS and Android app development.

But ultimately, your decision to build for iOS or Android first is going to come down to what works for your business:


If your company is a start-up and your capital is limited, then iOS is the best place to begin because not only is it cheaper iOS also brings influencers and PR with it. Chances are, you’ll get much more clicks for your app built on iOS.

If your audience is mostly located in emerging markets, then it makes sense to start with Android since they tend to visit app stores more often.